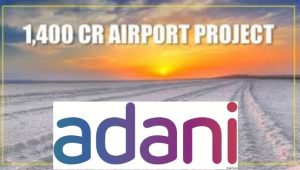 The central Government of India has now a green signal for building a commercial airport in Kutch, Gujarat.

A new commercial airport Estimated to be worth Rs 14 billion, will be developed in Kutch, Gujarat, the project will be built by Mundra International Airport. Mundra – which has created history in the Maritime grid is now poised to create an International Airport – the much-needed gateway for the big Kutchi NRI, in addition, to cater to the huge potential demand of Exim Air cargo.

The Centre has given its final approval for establishing a commercial airport in Kutch, Gujarat, with a whopping investment of about Rs 1,400 crore, according to an official document that was released in the press.

The greenfield project is to be built by Mundra International Airport Pvt Ltd was lately passed by the Union Environment Ministry after taking into consideration the views of an expert panel.

The clearance had been provided on the basis of environmental parameters to Mundra International Airport’s dream project subject to the compliance of certain criteria, the document added.

Adani group has also been intimated to receive the green signal from the Directorate General of Civil Aviation (DGCA) and the Airports Authority of India (AAI) for safety precautions and project facilities.

The project, which is estimated to generate employment for over 8,000 persons, is proposed to be commissioned in 2021-22. The Adani Group has proposed to convert its private airstrip at Mundra port complex in Gujarat into a full-fledged Commercial airport at an investment of Rs 1,400 crore.

Adani Group’s initial plan is to build the existing airstrip in Mundra into a dedicated commercial airport serving Boeing 747-400 category aircraft. A full-fledged aerospace manufacturing facility will also be a part of the project.

The project, which is estimated to generate employment for over 8,000 persons, is proposed to be commissioned in 2021-22. The proposal is to develop the existing airstrip in Mundra into a full-fledged commercial airport serving Boeing 747-400 category aircraft. A dedicated aerospace manufacturing facility will also be a part of the project.

Other than improved air connectivity in the area and work for neighborhood individuals, Mundra International said the proposed venture is required to get improvement in knowledge and training, building community well being, sustainable occupation, and rural infrastructural areas.

Recently, India welcomes the first batch of 4 Boeing Chinook CH-47F for the Indian Air Force which landed at the Mundra Airport in Gujrat on this new New Year 2019.

Due to plug and play ready infrastructure and utilities, many companies that are looking to get started immediately would prefer to be in Dholera and will be able to meet commitments to their clients in a time-bound manner. As part of Delhi Mumbai Industrial Corridor, Dholera has excellent connectivity with ports as well as hinterland to supply finished goods. Gujarat ranks highest in logistics ranking prepared by LEADS (Logistics Ease Across Different States) Report from Ministry of Commerce & Industry, Government of India in January 2018.

Dholera is strategically situated among Ahmedabad and Bhavnagar and it is all around associated with the cargo hallway, ports, roadways and rail administrations. The closest port at Bhavnagar is only 65 km from Dholera, Other significant ports in the region are Pipavav, Mundra, and Kandla. The National Highway Authority of India (NHAI) has recently come up with the tender for the development of express highways between Dholera and Ahmedabad, which will get operational by Feb 21, 2020. This will decrease the movement time from Dholera to Ahmedabad to around 60 minutes. The Metro rail among Ahmedabad and Dholera will tag along the interstate and will decrease the movement to around 50 min. Dholera will likewise have an International Airport, which will be the second air terminal for Ahmedabad.