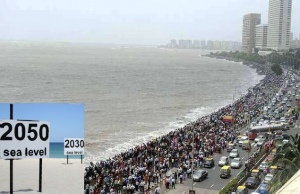 Four Indian cities – Mumbai, Kolkata, Chennai and Surat – could sink by 2100 if the current rate of carbon emissions is completely ignored and not monitored. That’s because, warns a report by Intergovernmental Panel on Climate Change, sea levels are set to rise 1 metre by the turn of the century. Also, extreme events such as storm, hurricanes and cyclones surges are often expected to happen once a year than once every 100 years. But the damage won’t be limited just to the coastline – large parts of North India may face huge water shortage by 2100 due to the melting of Himalayan glaciers.

Carbon emissions will continue to go unchecked.There is a large likelihood of we passing on a further damaged planet to our next generation. Although governments seem to act now, it’s not enough and not all are participating.

The bottom line: we’re running out of time to address the climate crisis. This issue is high on the agenda at the United Nations General Assembly – and it should be top of mind for the business community, too.

Latest IPCC Report lays bare the extraordinary risks we are now taking with the climate, predicting that coastal regions (where billions live) will by 2050 (just 30 years away) experience extreme storms/high tides that would that would in the past have occurred just once every 100 years on an annual basis causing trillions of dollars damage (remember IPCC tends to conservative end of prediction).

Its necessary is to educate every citizen of the world on how each one can contribute individually and collectively as society to minimize pace of climate change. A general awareness of to-dos in this regards has to be built. The good thing is now perils of climate change and other related aspects are being discussed globally, rather than being just left to a handful of environment activists.

IPCC reports are by nature too conservative. So its newest report that warming beyond 1.5 C all but locked in would create #ocean conditions “poised to unleash misery,” is a reason for alarm. A really loud alarm.

#Flood damages will increase either 100- or 1,000-fold — in a world where king tides are already causing cities like Miami to flood on a regular basis, and where Indonesia just announced a new inland capital because Jakarta is sinking.

At two degrees, the report anticipates that the frequency of extreme El Niño events will double, leading to greater risk of forest #fires and #hurricanes…

Melting #permafrost and other sources of biochemical #methane #emissions could cut the 1.5 C carbon budget — the amount of #carbon the economy can heave into the atmosphere without going above a certain temperature — by 5 years.