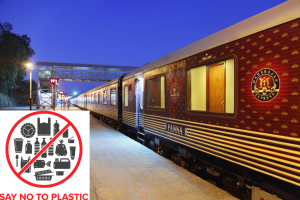 Single-use plastics less than 50-micron thick will be banned on trains and stations from October 2, The Hindu reports. Authorities have been told to expedite the installation of water bottle crushing machines at major railway stations while vendors have been directed to avoid using plastic bags. IRCTC, the catering arm, has been asked to return all plastic water bottles in a bid to extend producer responsibility. Asia’s second-largest rail network generates about 85,000 waste water bottles a day, according to estimates by non-profit Down to Earth.

The nation’s largest transporter, Indian Railways, has decided to put a ban on single-use plastic material on its premises, including trains. This ban will be implemented from October 2. The move comes a day after single-use plastic was banned in the Parliament premises.

A great initiative by railways to reduce plastic footprint by pledging not to use single-use plastic. Many more such rigorous efforts are needed to improve planetary health to a sustainable level. Choose oxygen, shun plastic! Ban on plastic will never be implemented until a practical, reliable and reasonable solution is in place, combined with the efforts by both Government and public to stop plastic. very onerous but achievable.

Ban on non-reusable plastic by Indian Railways is a positive, albeit little late, step towards being responsible for own carbon footprint, given the size and impact of the organisation on daily lives of us Indians. Does that, combined with similar restrictions in Lok Sabha, increase awareness and encourage public to support plastic free society? I am hopeful!

Good First step and same needs to be done on Bus Station, and Airports. Give quality Portable water at Airports, Bus Stands and Railway Stations. There will be no need to carry plastic bottles of water. We as a family promised not to buy these mineral water bottles and we have been successful for the past 2.5 years and its just mindfulness and commitment. Quite simple and satisfying.

During the Independence Day speech, Prime Minister Narendra Modi also called for a ban on single-use plastic. He called upon citizens to abandon the use of single use plastic. “Can we free India from single use plastic? The time for implementing such an idea has come. May teams be mobilized to work in this direction. Let a significant step be made on 2nd October,” said Modi.