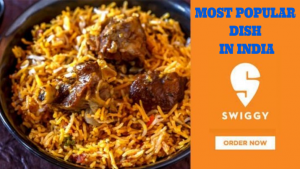 Indians just can’t have enough of biryani. Swiggy has said the mixed-rice dish is the most-ordered item on its platform, averaging 43 a minute and ahead of other popular foods such as dosas and burgers. Earlier, the food-tech unicorn said it had seen a whopping 681% increase in biryani orders in 2018. Rival Zomato agrees, saying chicken biryani has been its top-selling dish for two years in a row. Little wonder, then, exclusive biryani chains such as Behrouz Biryani, Biryani By Kilo, Mani’s Dum Biryani and Charcoal Eats have emerged on the scene and attracted significant investor interest.

Building a brand that too at international level is not an easy task. Rebel foods is trying to take desi food at widespread level and best part is without any brick and mortar type typical food eateries.

There focus on cloud kitchen along with impeccable supply chain mgmt. and branding makes it promising business.

Swiggy delivers over 1.5 Million orders per month on Cycles for 1.7 Lakh Delivery Partners in more than 120 Cities

Scalability and quality can be the main determinants for growth. and of course the varied menu to attract a big audience is the key.

This is a very interesting picture depicting the changing pizza dynamics in India. While the top part of the chart shows Google Trends in searches for the word ‘Pizza’ among the Indian states and the bottom part shows the evolution of the delivery model for pizzas. Pizza as a food item has clearly gained popularity in smaller states in India, the delivery preference for these pizzas has moved to Zomato and Swiggy, a by-product of the last mile food delivery logistics market in India. This has clearly benefited Domino’s (trading under: Jubilant Foodworks in India) as their share price reflects doubling over the last 5 years owing the reducing delivery costs, a principal component of their service.

Subway, Domino’s Pizza, McDonald’s and Burger King clocked the highest number of orders in five years, said Swiggy, which has entered over 290 cities since launch in 2014.

However, things get very interesting in 2017 and 2018 as pizza as a search term on Google has declined by 50% on Google and has been replaced by Biryanis. The mushrooming of several biryani food delivery startups in India and their popularity among VC investors in India during this period is a testament to these trends.

Swiggy claimed to have over 2 lakh delivery partners with women executives alone delivering over 2.5 lakh orders in the past five years. A Bengaluru man, who placed 17,962 orders with Swiggy, has emerged as the platform’s most loyal customer.