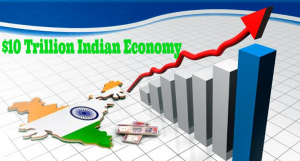 Mukesh Ambani said in an interview that massive growth slowdown in various sectors of the Indian economy is not permanent adding that India has the real caliber to grow into a $10 trillion economies in the next 10 years by 2030.

Mukesh Ambani’s speech at the Reliance Industries Ltd Annual General Meeting (AGM) said, that no one can stop the rise of the Indian economy and it would touch 10 trillion dollars by 2030.

*Reliance Jio Fiber broadband services are set to launch from September 5. Jio Fiber, which is a bundled service of broadband, fixed landline, and television, could also be a market Disruption like telecom operator Reliance Jio.

Reliance Industries to get Rs 7,000 crore by selling 49 percent stake in its fuel retail business to BP, Mr. Ambani said.

Saudi Aramco is looking to acquire a 20 percent stake in Reliance’s oil-to-chemical business for an enterprise value of $75 billion. Saudi Aramco will commit to supply 500,000 barrels per day of crude oil to Reliance Industries refineries.

Investment cycle of Reliance Jio is now complete and about Rs 3.5 lakh crore invested in the high-speed 4G network: Ambani.

Mukesh Ambani also laid out strong plans to launch the Internet of Things (IoT) on a pan India level, home and enterprise broadband, broadband for SME (small and medium enterprises).

The Jio boss’ Mr. Mukesh Ambani’s announcement to make cloud Freely available for start-ups is a welcome move by the Indian start-up community. This indeed is a significant and important step for Reliance’s good Old “Karlo Duniya Mutthi Main” mission. Isn’t Mr. Ambani s announcements the most look forward just like the “Mitron..” types by PM Modi. Something that makes curious and exciting always! Good times ahead for Internet start-ups in India.

Defining Jio’s incredible journey since 2016 a “great success”, Mukesh Ambani said that India was “data dark” before the arrival of Jio into the billion-dollar telecom industry.

A Giant Technology boost comes as the group restrategizes its customer concentrated retail and telecoms businesses to create synergies by enhancing the quality of its key oil-and-gas business. Its startup Jio has overturned India’s telecom market by giving data services at a much cheaper rate and turning into India’s top mobile service provider in terms of subscribers in only three years.

According to media reports, it is reported in what it could turn out to be India’s Biggest Deal in the Retail sector till now, Jeff Bezos-backed e-commerce marketplace Amazon is in initial stages with Mukesh Ambani-led Reliance Retail to buy 26 percent stake in country’s biggest physical retailer.

We also recently found out that Amazon is very much surprised with Reliance Retail’s market dominance in electronics, mobile phones, and grocery stores.

Amazon is already aware not to breach Press Note 2 by not acquiring more than a 26% stake in Reliance Retail. This structure will enable Amazon to list the retail division of Reliance as a verified seller on its marketplace. Marketplace companies are not allowed from owning over a 26% stake in merchants under Foreign Direct Investment (FDI).

The arrangement which is a long way from fructification will assist Reliance with reducing its debt burden, which had arrived at Rs 2.88 lakh crore by June 2019. It’s important that the organization was likewise in talks with Alibaba for venture a year ago. In any case, the discussion didn’t advance.

Amazon and Reliance may have understood that battling against one another isn’t worth their time and energy. Thus, they are thinking about a joint venture.

An intriguing look at Reliance Jio’s quest to dominate in digital India by capturing the spending of Indian households and creating an ecosystem for data, content, and retail (especially for the small retailers that dominate in India.

Mukesh Ambani is on his way to creating a global empire. His recent project of acquiring Hamleys was his first step that made his presence felt in the international market and now his new venture of Tiffany stores certainly gives us an idea about his ambition of global business.

Mukesh Ambani broadly said that Data is the new oil. Presently with the administration demanding that all information produced in India be put away locally, server farms could be the following large business opportunity. What’s more, the Adani Group drove by Gautam Adani is wagering enthusiastic about it.