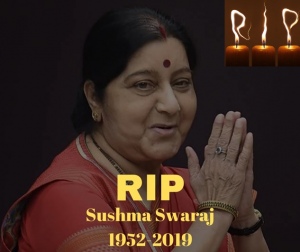 Former external affairs minister Sushma Swaraj died Tuesday night in New Delhi at the age of 67. The BJP leader suffered a sudden cardiac arrest. In a political career spanning 40 years, the lawyer-turned-politician broke the glass ceiling on numerous occasions: She was the first woman to be foreign minister, leader of the opposition and Delhi chief minister. Described as India’s “best-loved politician,” Swaraj made the foreign ministry accessible through her prompt social media responses.

You were a People’s minister and our country will remember you fondly for your hard and selfless work.

Your tenure has ensured that Indians are well taken care of wherever they travel.

May your soul rest in peace Sushma Swaraj Madam,???

You have given the external affairs ministry a human face for the first time.You were the troubleshooter for any Indian stuck anywhere broad.

You took a personal interest in resolving minor issues like issuance of visa to the needy and getting relief to Indians in distress. ?

You had built an Indian human capital abroad and the response was an outpouring of support for the Modi government from the non-resident Indian community.?

Shocked and saddened on sudden demise of Sushma Swaraj Ma’am
You was truly an inspiration for me,You have taught that a woman can do anything and create her own identity by herself.You are a true HERO
You will be missed.
May your soul rest in peace??

And while I felt like writing a condolences post, something that would leave politics out and focus on the news as I usually do on this platform – I will not. I want to celebrate her. Remember her. And honour her.

She was more than just another politician for an entire generation. More than her post of Foreign Minister. Yes, those are important, and the stats will show that she was the first female Foreign Minister since Indira Gandhi, contested so many number of elections, etc.

They won’t tell you how she put people in place, in the Parliament or out, not by mud-slinging, but by wit and humour.

They won’t tell you how she taught a whole generation of young girls that you too can be in a screaming match; that you should not cower down when men shout at you, especially in the dirty game of politics.

They won’t tell you how she stood upfast and only ever wore a sari, perfectly pleated and pinned, never bowing down to the laws of other nations. How she stood for India with pride in the beautifully drapped national dress.

She epitomised dignity, commitment to Democrat norms and grace in politics. RIP