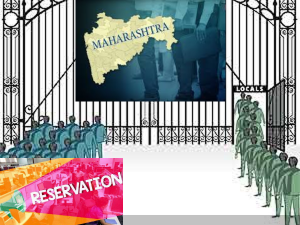 Industries in Maharashtra will soon have to furnish proof that 80% of their employees are “sons of the soil,” or their GST refunds would be blocked. A new resolution covering both permanent and contractual staff would be brought into effect, the state’s industries minister Subhash Desai said. If required, Maharashtra may even follow Andhra Pradesh in authorizing reservation for jobs, Desai added. Currently, over 90% of employees in the state’s industrial sector are locals. Maharashtra made GST refunds worth ₹3,035 crore to industrial establishments in 2018-19.

In the era of globalization, many countries and international organizations are trying to foster the culture of multilateralism, thereby ceasing the role of national boundaries. At the same time, forget about national boundaries, various states in our country are coming up with local employment reservation bills. Andhra Pradesh has become the first state to do so by offering 75 per cent reservation to locals in private jobs. This seems to be done to keep up the poll promise and to give priority to young people from the state. Even Goa is likely to come with 80 per cent reservation. Such moves could be counterproductive by discouraging MNCs and other private entities which require diversity at a workplace. As an investor, why would one ever be bothered about the location of an employee and not the skill set?

Andhra and now Maharashtra. The march towards regionalism continues. Soon other states will be pressured to follow. While there may be a valid argument to employ “sons of the soil” (they should really find a more inclusive term!) the larger issue of nationalism will take a hit. Already in places (Mumbai for example) non-Maharashtrians are often beaten up and their means of livelihood destroyed.There is a great need to raise the availability of jobs across the nation and also infuse a spirit of nationhood. We are citizens of a democracy that has defied nay-Sayers since Independence. Let it not be lost to the narrow visioned hands of regionalism…

Domicile based reservation is pure politics. It lacks even the pretence of the noble motive. It creates unnecessary employment demands and ultimately affects organizations in quality, effectiveness and competitiveness. It would make them bulky and uneconomical.The states like Andhra, and now Maharashtra, will progressively become less and less attractive destinations for investments and expansions. These policies have the potential to divide the nation and it is unconstitutional.

The Ostensible move of 75% Reservation for local in Private Jobs. The first time CM of Andhra Pradesh state passed an legislation making it compulsory to provide 75% of jobs to locals in private sector. The state government doesn’t have any infrastructure to improve and train the locals so they made an easy escape route by burdening the businesses to develop skill set in local people. This move may seem like an golden move by government but in long run it will destroy the the businesses and investments from outside. For eg., Will the state be able to attract any IT firms, will they accept the 75% rule. Instead of new firms coming the existing firms will run-away. Businesses which need only muscle power will not have any problem but what about the once which need skilled employees?

A firm would like to choose whoever suits for their organization instead of picking people based on their locality.Will Mr Jagan Reddy bring another legislation saying 75% of total investment in state has to be from the locals only and they will restrict outside investment to 25%?

If, this move of local reservation spreads to other states then we will be looking at a crumbling economy and tumultuous job scenario.The Andhra Pradesh Government passed a bill to reserve 75% jobs to locals. A time of 3 years has been given for compliance. The responsibility of creating skilled workforce lies with the industry and not the government.

Now, imagine that every state does this. Half of the employees in Maharashtra, Karnataka and Telangana will have to move out. Large corporations like Infosys, Wipro & TCS can never have a national talent pool nor diversity at work place. They in turn will opt to avoid Andhra in their expansion plans.

Regressive labour laws will undermine new investments in the state while appeasing to the uninformed. Over the years, the law would survive but job creation would suffer. Creating protectionist walls is easy meat for the politicians. Vote bank politics should not be allowed to cross a line.

India is one and so must the freedom to choose, live and work in any part of India. The Economic and social costs of this law will be borne by locals who are meant to benefit, in years to come!

It’s a shame that now people would be discriminated on the basis of where they were born (in the same country). What are we? A country with states or A Union of Countries. Is India = European Union?