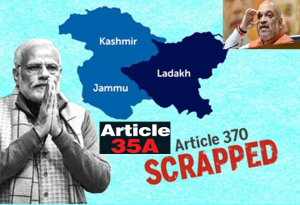 After the merger in India, Maharaja Hari Singh of Jammu Kashmir talked about the political relationship of J & K with the then Prime Minister Jawaharlal Nehru. Later Article 370 was added to the constitution after this meeting. Article 370 gives special rights to Jammu and Kashmir.

What is Article 35A?

Instead of seeing the whole thing from the perspective of politics, it makes lots of sense economically.

There should be a boost to tourism in Ladakh and better connectivity to this region. Till now most of the doles (financial packages) for the state were cornered by the Kashmir Valley. Now the UT will have a separate budget and spending will come directly from the Center. Better hotels and resorts could be developed as chains like Taj, ITC etc will now be able to buy and set up hotels and resorts here. Also, we will be able to improve the strategic infrastructure in the UT to counter the threats imposed by China.

The Union Territories of Jammu and Kashmir will get more industries, and there would be a similar boost to tourism thanks to new hotel chains coming in. Food processing industry will get a boost and reduce waste leading to the creation of jobs. This would help reduce unemployment and hence lead to a reduction in the number of people available for hiring to the terrorist groups.

Golden Lining in the history of Indian politics or a Doomsday for Kashmir?

Government decides to repeal Articles 370 & 35A, J&K & Ladakh to be separate Union Territories, 10% reservation for economically backward sections of society in J&K as well.

3. Strike when the iron is hot: Lok Sabha majority is leveraged & amendments are proposed directly at Rajya Sabha to become unstoppable.

I won’t comment on the political aspects. However, a few questions to the people:

Why are people dancing on the roads, people who don’t even know or understand the demographics of J&K?

Why are people glorifying politicians & resorting to jingoism when the point of discussion must be the emotional state of J&K inhabitants, people who are actually affected?

Do you even understand them?

What does it mean for the ex-state of Jammu and Kashmir?

1. Increase in #tourism to Ladakh with the stigma of violence gone?
2. Increase in Foreign Direct Investment with non-locals allowed to buy land and property?
3. Possible changes to the Demographics of the region?

Personally, while I believe that the changes will be good for businesses in the longer term, the implication on the human aspect will take time to manifest.

How do you see the impact?