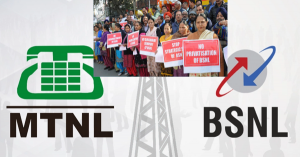 While the management has failed to give them any assurance, the employees have not been told when or whether they will receive the salaries at all.

Government telecom companies are operating in BSNL and MTNL losses. This is the reason why 1.98 lakh employees of BSNL and MTNL have not received the salary of July. An employee union leader said this on Thursday. BSNL Chairman and Managing Director P.K. Purvar said that the employees will be paid the salary till August 5. At the same time, the employee leader said that the management has not shared any information regarding the distribution of wages.

P Abhimanyu, convener of All India Unions and Associations of Bharat Sanchar Nigam Limited (AUB), said that the salary for the month of July has not come. There is no information about when the salary will come. Contacting the salary, BSDL CMD said that the employees will get salary till August 5.

There was a delay in the salary of the month of February also
before the February salary was delayed. BSNL has to spend 750 to 850 crores as salary every month, while MTNL needs around Rs 160 crores.

Sunil Kumar, director of MTNL’s Human Resources and Enterprise Business said that the company is engaged in the recovery process of some dues. After this, the salary will be paid on priority basis. Kumar is managing the additional charge of MTNL CMD.

As per the reports, in past recent moths there was lots of buzz that the Department of Telecommunications (DoT) had suggested merging the two entities in a bid to revive the cash-strapped telecom firms. The suggestion came when it was realized that the two companies were not able to stand out independently and revive in highly competitive market.

The DoT has been working on a rescue plan and revival package for the two in the form of voluntary retirement schemes, asset monetization, and allocation of 4G spectrum.