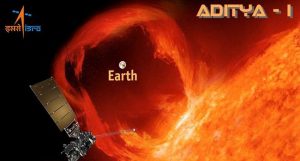 After the grand and huge of the moon mission, Chandrayaan 2, Indian Space Research is now betting big to take another big leap to reach the sun as early by next year.

ISRO is now aiming and making all the necessary efforts to build a spacecraft mission that will be sent to observe the Sun in 2020. This mission is currently tagged as Aditya-L1 or Aditya, whose real translation is the Sun.

As per the reports it is being certain that with the huge success of the launch of the Chandrayaan 2 mission, which is now deemed to be India’s second moon mission. Chandrayaan 2 was launched five days ago, i.e. July 22, 2019, and is expected to land on the moon around September 8, 2019.

ISRO’s Solar Mission: Aditya-L1 To Be Launched In 2020

The research organization has officially disclosed a couple of details on its official website, where they have also stated that this mission will offer researchers and solar scientists from all a wide range of opportunities and scope for research.

K Sivan, who leads the Indian Space Research Organization spoke during a news conference last month, saying, “It is One and a half million kilometers far from the Earth. It will always look at the Sun and give an analysis of the corona because it has a major impact on climate change.”

He has given detailed information that the mission has been already planned and was in a pipeline to launch sometime during the first half of 2020. He also disclosed other details of the next upcoming mission of reaching out to Venus are also in the process and will be transformed into reality in the next two to three years.

On its website, ISRO speaks about the mission highly and expects the Aditya-L1 to solve some age-old issues. The website says, “the enhanced Aditya-L1 project will enable a comprehensive understanding of the dynamical processes of the sun and address some of the outstanding problems in solar physics.”

Additionally, the Aditya-L1 will be utilized to provide monitoring and observations of the chromosphere and photosphere of the sun. Also, particle payloads will be used to study the particle flux emitting from the sun.