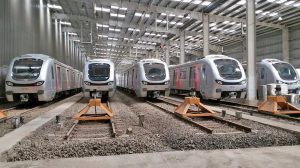 India is adding one more feather to its milestone as the authorities notified that the two capitals of Jammu and Kashmir; Jammu and Srinagar will get metro trains in the next five years. The governor Satya Pal Malik recently made an announcement that they are working on a developed elevated light rail transit system at the cost of Rs 8,500 Cr.

World’s Highest Rail Bridge is Being Built Over Chenab River in India, Taller Than The Eiffel Tower

Government has roped in Dr E Sreedharan, who is also known as metro-man, as the Principal Advisor to Mass Rapid Transit Corporations (MRTCs) of Srinagar and Jammu. The proposed Light Rail System is the first of kind in India which will have low footprint, less noise, more comfort, aesthetic appeal and will sync with the surrounding landscape. Principal Secretary to the Government, Housing and Urban Development Department, Dheeraj Gupta, said the overall estimated cost of light rail system which they are planning to introduce in two cities will be funded through debt, State’s equity and Central assistance.

Gupta said that in phase one of the elevated light rail transit system in Srinagar, two corridors will be laid from HMT junction to Indra Nagar and Osmanabad to Hazuribagh. He said that in Jammu, in phase one, two corridors from Bantalab to Greater Kailash and Udheywala to Exhibition Ground will be developed. In the second phase, corridors will be built from Greater Kailash to Bari Brahamana Railway Station and Exhibition Ground to Satwari Chowk to Airport.

Further adding he said that two Mass Rapid Transit Corporations (MRTCs), for Srinagar and Jammu, which were incorporated in February this year will take steps to address the issue of urban mobility in the State in a holistic manner by providing safe, affordable, quick, comfortable, reliable and sustainable access for the growing number of city residents to jobs, education, recreation and such other needs within our cities, by establishment of quality focused multi-modal public transport systems that are well integrated, providing seamless travel across modes, land use transport integration, introducing intelligent transport systems for traffic management etc.

He said that these Corporations have extended their arms in achieving their objectives of proper, orderly and rapid development of these areas and executing plans, projects and schemes especially related to Multi-Modal Transport System (MMTS) and Mass Rapid Transit System (MRTS).

Chenani-Nashri Tunnel, Asia’s Longest and Safest Road Tunnel through the Heart of Himalayas

Gupta said that as per the mandate given, two MRTCs have also undertaken preliminary steps for operationalizing city buses, within the jurisdiction of the MRDAs, to set new standards and benchmarks in public transport.

These metropolitan region development authorities are all set and soon expected to cater the motive of coordination, besides examining the accurate, organized and massive development of the areas in these regions and executing plans, projects and schemes for such development and also boost resources for mega infrastructure projects.