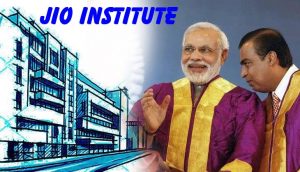 Reliance Industries Ltd had recently announced that it has made strong plans to invest around Rs 1,500 crore in building its proposed university, Jio Institute, in the next two years, it has informed the government’s Empowered Expert Committee (EEC). The Indian Business powerhouse main goal is to create a world-class centre of learning across 800 acres in Karjat near Navi Mumbai.

Reliance Industries has also intimated the government that it is in talks with the academic and institutional scholars at Stanford University and Northwestern University in the United States as well as Nanyang Technological University in Singapore for enabling to setup State of the Art infrastructure facility.

This new development comes after the Empowered Expert Committee (EEC), which is the supervisory authority for all Institutes of Eminence had in April voiced its displeasure to the Jio team over long delays and lack of planning in opening the dream institute.

Reliance Foundation’s Jio Institute was among six colleges that have been selected as Institutions of Eminence – a status that will ensure complete autonomy and facilitate them to make a mark in world rankings.

Apart from Jio Institute – which is yet to opened and established, other five institutions were Indian Institute of Science- Bangalore, IIT-Bombay, IIT-Delhi, Birla Institute of Technology and Sciences (known as BITS-Pilani) and Manipal Academy of Higher Education.

In the response with the lots of allegations and serious concern, the Ministry of Human Resource Development then came out with an explanation on how Jio Institute was acknowledged and awarded such a coveted status despite having no physical infrastructure or academic history in teaching with them. According to the government clarifications, Jio Institute was given this valuable status under Greenfield Project – purpose of which was to allow responsible private investment and resources to build world class educational infrastructure.

There were selection criteria of four parameters on which all applications were analyzed.
1). Ready Availability of huge land for construction of the world class university.
2). Setting and integrating a core team with very high qualification and wide range of academic experience and expertise.
3). Sourcing and availability of funds and resources for setting up the institution.
4). A strategic vision plan with clear annual milestone and complete action plan.

“The Committee (selection committee) has come to a conclusion that out of the 11 applications, only Jio Institute satisfied all the four parameters, and hence was recommended for issuing a letter of intent for setting up an Institute of Eminence,” the HRD Ministry had said. The Ministry also clarified that the private institutions under the project will not get funding from the government.

The selected Institutes of Eminence will be having the complete freedom and autonomy to charge the fees for domestic students, on the condition that no student who clears the criteria for admission is turned away due to lack of money. These top-class institutes can also fix and charge fees from foreign students without any restriction.