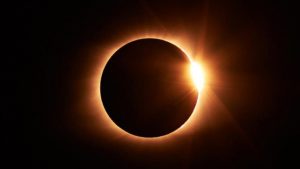 After the eclipse ends, after bathing, put new clothes and donate something. Then start doing any other work.

After the eclipse ends, purify the whole house with ganga water and purify your whole house.

When the eclipse ends, worship in a temple near the house, donate and donate.

It is also recognized that feeding a cow when it is over, gives good results.

To get the blessings of Mother Lakshmi, it is also the law of worshiping Indra Dev after the eclipse is over. To maintain a pleasant atmosphere in the house, the lamp must burn near the Basil plant.

Why does the solar eclipse take place:
As per the scientists in the world believes that when the moon comes between the sun and the earth, due to which the light of the sun does not come on earth. This condition is called solar eclipse.

According to Indian mythology, when a dispute arises with the Gods and demons for the emperor, during the time of sea maratha, Lord Vishnu took the form of Mohini Ekadashi on the day of Mohini Ekadashi to solve it. When Lord Vishnu put the gods and the demons aside. But Asur came in the line of deities from deceit and sat down and drank Amrit. The moon and sun sitting in the line of God saw Rahu doing this. After this he gave the information to Lord Vishnu, after which Lord Vishnu separated his head from the Sudarshan Chakra to the head of Rahu. But Rahu had a pudding of nectar, which led to his death, and his head remained part and the part of the torso was known as Ketu. That is why Rahu and Ketu consider sun and moon as their enemies.

During this time in India, there will be night, while there will be days of time in Chile, Argentina and the South Pacific Ocean. The duration of the eclipse will be around 4 minutes and 33 seconds, which will be seen in the range of 11 thousand kilometers in a day in the night.
The full time of this solar eclipse will be almost doubled compared to the previous full solar eclipse in August 2017. At that time, the full sun eclipse lasted just 2 minutes and 40 seconds.

This view is in the cities of La Serena, San Juan, Bragado, Junín, Andrio Cuarto, Chile and Argentina, where today’s complete solar eclipse can be seen. Significantly, when the moon comes between the sun and the earth, then the solar eclipse occurs. The moon covers the sun partially or completely and the shadow of the moon falls to the earth.