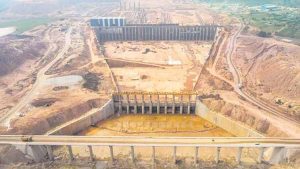 The milestone dream project of Telangana Chief Minister K Chandrashekar Rao was recently inaugurated on 21st June. Megha Engineering and Infrastructure Limited (MEIL) have completed the project on a fast track mode and the construction has been completed in record time. All the civil and electro-mechanical works in Medigadda to Mid-Maneru link-1 and link-2 has been completed.

Coming out on top with many years of experience, the organization introduced 105 Machines out of 120 machines and developed 17 pump houses out of 20 in whole KLIP. Medigadda, Annaram, Sundilla (Link 1) pump houses alongside the world’s greatest pump house at Lakshmipur (Package 8 in Link 2) are prepared for pumping water. This renowned Kaleshwaram Lift Irrigation (KLIP) Project would serve irrigation water to 37.08 lakh sections of land of land; another 18.82 lakh sections of land of direction territory will be balanced out with it.

“It has a privilege and lifetime opportunity to be able to bring the plan from print to reality. We have successfully engineered the world’s biggest pumping scheme in India. To achieve that, we used world-class technology involving the best agencies that have delivered quality. We at MEIL believe that quality and timely delivery of projects are the benchmarks to our success”, said B Srinivas Reddy, Director, MEIL.

“This is by far the first of its kind and the largest lift scheme in the world. The project requires 7152 MW of electricity to pump 3 TMCs of water daily. In the first phase, 4992 MWs of electricity is being used for pumping 2 TMCs of water. MEIL has proven its strength in diverse forte – from the construction of major pump houses and power transmission infrastructure through to and civil and electro-mechanical engineering works at their best for pumping water this season,” he added.

KLIP has been completed by MEIL in 2 years.

TILL DATE, THE BIGGEST LIFT SCHEMES IN THE WORLD WERE THE COLORADO LIFT SCHEME IN AMERICA AND THE GREAT MAN MADE RIVER IN EGYPT. THE CAPACITIES OF THESE SCHEMES ARE IN HORSEPOWER AND THEY TOOK OVER 3 DECADES FOR COMPLETION.

Now, the Kaleshwaram lift irrigation project, an Indian lift scheme has become the worlds biggest in terms of extreme capabilities and record level capacities. Many other lift irrigation projects have also been completed and maintained by MEIL across India. The Pattiseema project in record-breaking time and got a place in “Limca Book of World Records” for that achievement. It also completed Handri-Neeva lift scheme in 2012 and maintaining it without any single problem ever since.

KLIP has a unique power infrastructure

Nearly 7152 MWs of electricity is required for lifting 3 TMCs of water per day. This equals the total demand/consumption of electricity in most Indian states. MEIL completed construction of electrical infrastructure for KLIP with 3057 MWs capacity that includes six 400KVand 220KV substations, transformers and 260 kilometres of transmission lines, 7 KMs of 400 KV XLPE under Ground Cable etc. This huge electrical infrastructure has been established for providing drinking water and irrigation purposes in the world.