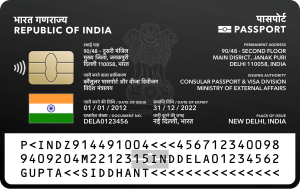 Its a very good news for Indian Citizens as they will soon get e-passports to keep their identity and travel data handy. With the Government of India approval, a global three-way tender has already been announced and also tendered to acquire electronic contact less interface as well as the operating system for the manufacturing of e-passports. The platform on which it will be built to be acquired for e-passport will meet all the complainces and regulations with the International Civil Aviation Organisation standards.

The technology to be used in the Indian e-passport has been jointly developed by the Indian Institute of Technology-Kanpur, National Informatics Centre (NIC) and India Security Press (ISP) and the Ministry of External Affairs officials. The new passport will come with an inlaid chip which will carry the personal information of the Indian citizen as well as his travel details.

Reminds me of the Abu dhabi airport unmanned immigration. A quick retina scan gives away the details of an exiting traveler. Not only will it reduce time and long queues but also improve airport space which can be put to more efficient use.

The system will be placed in the back of the passport and will sport a chip with 64 kilobytes of storage space and an embedded rectangular antenna. It will carry information for up to 30 visits, for now. Later on, it will also store the photograph of the passport holder and even biometric data like fingerprints too.

Also, this Passport chip should bear all the biometric data saved in Aadhar and must be tracker enabled. This inputs will check misuse, lifting and help catch fugitives.

This chip is relied upon to give a progressively secure approach to store the visa holder’s information as any endeavor to mess with the chip will result in disappointment of identification confirmation. The chip has apparently been structured in such a way, that the information on it can’t be gotten to remotely. The main testing of the chip has just been done in a US-based research center, reports propose.

Moreover, being used cases, the chip is required to pass on information at air terminal counters inside minutes and spare time and bother on part of the travelers and the air terminal staff.

The new chip-carrying passport will also have better quality like thicker covers and better pages. This is in line with the statement by Ministry of State for External Affairs General (Retired) VK Singh in the parliament during the recently concluded Winter Session that work is underway to issue chip-embedded e-passports with better paper quality.

It’s a welcome move and good initiative by the government to improve the features of the Indian passport.