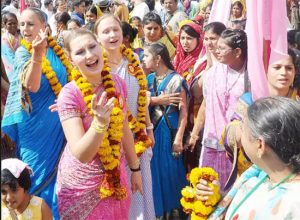 It will be applied to the examinations, which will be held by 2021. Students aged 17, 18, 19 will be studying ISKCON movement in their high school as a part of their curriculum.

In a latest development, the Cambridge body of examination based in United Kingdom has included ISKCON as a new topic to be studied as from next year in Hinduism for their Cambridge International AS & A Levels of Examinations.

His Holiness Radhanath Swami, ISKCON Spiritual Guru said, “This is truly an achievement and a step ahead to impart the essence of Hinduism globally. It’s imperative for children to connect to this vast ancient knowledge that has been into existence ever since the existence of human being. In today’s competitive era which is full of stress resulting many youngsters getting into depression, if our children are enlightened with the real knowledge of life they will know how to combat stress easily. With this, they will better understand the real purpose of this human life and how they should conduct themselves. This will take them long way in life as Hinduism is just not religion but beyond that. It’s the way of living , purposeful living. Cambridge is one of the strongest pillars of modern education system and for them to include ISKCON in their syllabus is a huge recognition of our spiritual practices.”

Cambridge body of examination based in UK for their International AS & A Levels has added two new movements within Hinduism i.e. International Society for Krishna Consciousness (ISKCON) and Sathya Sai International Organisation. Course syllabus at Cambridge will be including origins, practices and key teachings of these new revolutionary Hindu movements.

Practices of ISKCON including bhakti or devotions, living and well being in communities, sankirtana (chanting of holy names), the ‘four regulative principles’, preaching, ‘Food for Life’ project etc. are a part of syllabus. Apart from this, the teachings of ISKCON will also be covered in depth.

ISKCON’s main teachings and principles including the achievement of moksha or nirvana through bhakti yoga or sadhana, the belief in Vishnu/Krishna as supreme and personal deity, parampara (succession of authority), the Bhagavad Gita and Shrimad Bhagavatam as sources of scriptural authority and the spiritual equality of women are also a part of this syllabus, added Radhanath Swami.

Srila Prabhupada, who founded ISKCON more than fifty years of ago earlier has been appreciated by scholars and religious leaders for his presenting India’s Vaishnava spiritual culture in a relevant manner to the contemporary global audiences. Also known as Hare Krishna movement, ISKCON includes 500 major centers, temples and rural communities, nearly 100 affiliated vegetarian restaurants, 1000s of local meeting groups, a range of community based projects, and millions of members and devotees worldwide.