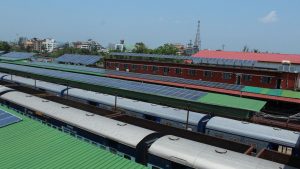 Guwahati now has become India’s first railway station to be runnned by solar power. The milestone project for Indian Railways of installing solar panels was commissioned two years back in April 2017.

Guwahati has set a brilliant example to go green and transforming environment friendly railway stations in the country, and also Guwahati becomes the first solar-powered railway station in North East India. The solar project was executed and implemented with a lot of expectations riding on it.

Around 2,352 solar modules with a capacity of generating 700 KWp have been set up over the roof of Guwahati railway station. Solar panels have been installed at the rooftop solar power plant.

Pranav Jyoti Sharma, CPRO of North-East Frontier Railway said, “The Guwahati railway station runs 100% on solar power. This is a first of its kind initiative for the North-East and has proven to be immensely beneficial.”

Mr Sharma also said that about this project being part of a larger concept to substitute regular lights with LEDs, which could be more energy-efficient for the station.

The solar plant is expected to reduce the carbon emissions drastically, and also eliminating the reliability on power utilities and minimize energy consumption from outside sources. The plant has generated 7,96,669 KWH of power from 12 April 2017 to 10 May 2018.

The cost of the project is estimated to be Rs 6.7 crore with an average power generation capacity per day of 2048 KWh. The solar power plant will save Rs 67 lakh worth of electricity for Indian railways.

Guwahati Railway Station– a gateway to North East India, is one of the most important railway station from visitors and transportation point of view. The station sees a footfall of 40,000 passengers every day. Turning Guwahati Railway Station into a fully solar-powered one is a great milestone for the Indian Railways.

Around 6.3 lakh kg carbon dioxide emissions have been cut off between April 12 last year to May 10 2018.

With this, Guwahati has set a certain standard that local governments across the nation, and the world, could emulate for a cleaner, more sustainable future.