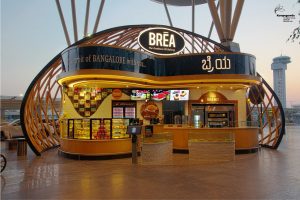 BREA, an Iconic Brand which is best known for freshly baked bread products to its customers for more than Hundred years now, has now expanded its footprints and has launched at Bangalore’s Kempegowda International Airport (KIAL).

The Bengaluru based local brand has been re-branded and re-positioned in the market in a new form of a swanky live bakery to tap global audiences and tourists traveling through the Bengaluru Airport.

Zomato Set To Launch Its Own Multi-city Food Carnival Zomaland, Making Entry Into The Event Space

Bangalore based bakery brand BREA has just now opened its first live bakery at Kempegowda International Airport with the only main purpose of taking the brand presence to a global audience.

Bengaluru-based leading marketing agency Brandvak has been assigned the task of developing Brand’s image and providing ideas for exclusive packaging. “The overall idea of design and layout for the store is to get synced with the Organic Design Language of the Airport Terminal Facade and furthermore contemplating the structures and layers of Baking,” Bijitesh Mallik, Founder & CEO of BrandVak.

The main idea was that tourists from all across the world can experience baking at the brand’s very first live bakery and also cherish the brand’s newly launched ‘BREA Roti’ and other authentic Bangalore cookies at the BREA newly open store at KIAL.

It was initially established by two brothers, Dianath and Mothasim Arshad in 2014 which was backed by a famous company named Renowned Foods, the company main vision is to attract and pull the customers back to their roots with conventional baking methods and make them aware to the unique concept of healthy baking.

I was reported that in a span of around 5 years, BREA has managed to gain Rs 5 crore turnover and now has retail outlets strength of more than 250 stores in Bengaluru. Now the company main goal is to touch 500 outlets milestone by the end of 2020. BREA also has kiosks in a couple of areas in Bangalore including Commercial Street, Banaswadi, Yamlur, Yelahanka, Sadashivnagar, and CV Raman Nagar.