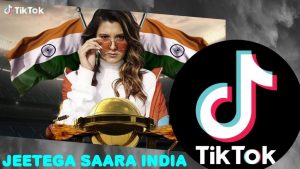 Everyone eyes across the globe is all set for upcoming ICC Cricket World Cup 2019, everyone from the cricket fraternity like Commentators, coaches, physiotherapist and from fans to brands has been gearing up for the Iconic tournament.

As part of the ongoing craze and brand collaboration, short video platform TikTok has teamed up with Sony Music’s singer Aastha Gill for an ICC World Cup 2019 Anthem – ‘Jeetega Saara India’. This anthem is composed by Mix Singh with lyrics by Yawar and Rish.

The song has been beautifully composed and lyrics framed keeping in mind the spirit of the World Cup. About the anthem, singer Aastha Gill said, “World Cup springs a feeling of patriotism that energizes a nation. So, when I decided to work on a World Cup song exclusively for TikTok, I wanted to bring alive the same spirit for the rest of us. I knew it had to be to the tune of Saara India now called Jeetega Saara India. This song aims to be a slogan that we all will be rallying around to cheer for the Indian cricket team.”

Sanujeet Bhujabal, Marketing Director, Sony Music India adds, “Music plays a pivotal role in uplifting the spirit of all cricket enthusiasts in India and #CricketWorldCup does exactly that. Aastha’s vocals along with her spirited singing and the lyrics bring out the josh like never before. We are thrilled to be working with Tik Tok on the same and we are sure the platform will reach the song to over a billion cricket fanatics in India and the globe.

Social Media Sensation TikTok which recently been shot to fame and has now become one of the world’s most downloaded app and it has garnered significant dominance in India. The app downloads were recently banned by the government but the ban was soon lifted. TikTok is an app that enable users to create short and entertaining video content for the subscribers. It has thousands of stickers, filters, and features available, and such collaborations with popular artists fuel the app’s mission to enable its users to capture and showcase their creativity, knowledge and moments that matter to them, directly from their mobile phone, enabling everyone to be a creator of their own content.

The partnership will motivate the users to create unique content related to the World Cup and compete in multiple in-app challenges and tasks as well.

Commenting on the launch of the anthem, Mayank Gandotra, Director of Business Development and Music Partnerships at TikTok India, said, “At TikTok, we continuously work towards giving our creators an opportunity to create, share and discover content that reflects moments that matter to them and this time is no different. Jeetega Saara India captures the feeling of every Indian who wants Team India to bring World Cup home and we are hoping that our users will spread this feeling by creating content using the TikTok World Cup Anthem. This is our way of bringing the entire TikTok community and the country together to support the Indian team during this tournament.”

A few days back, in a post on their official website, ICC revealed the official song of the ICC World Cup 2019. The song is called “Stand By” and is an original by breakout artist LORYN. The official song is in a joint association between the breakout artist – LORYN and the United Kingdom’s most successful and influential bass band – Rudimental.