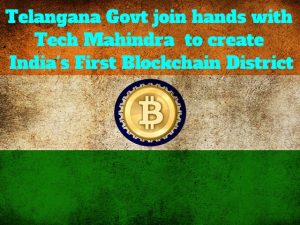 Blockchain Technology, which is considered to be one of the most innovative and revolutionary latest technology that enables a massive change the way people and businesses transact, providing convenience, safety and security, is in for a big boost.

While recently there was lots of buzz that Indian Leading Software giant Tech Mahindra is setting up a Blockchain district in Hyderabad, Eleven01 Foundation is developing an exclusive Blockchain protocol to suit the country’s needs, and the Union Government is establishing a Centre of Excellence on Blockchain here.

Besides, the International Institute of Information Technology, Hyderabad (IIIT-H) will make part of its protocol development research to the virtual cluster of Blockchain district.

INDIA AS BLOCKCHAIN CAPITAL OF THE WORLD

Blockchain is a distributed ledger technology that collects and stores information across multiple systems safely and securely and such data stored and distributed cannot be easily manipulated like copied, hacked or tampered with.

It is recently reported that Telangana government inks an agreement with IT Major Tech Mahindra here on Friday to establish the Blockchain district, a first-of-its-kind Centre of Excellence for Blockchain Technology.

Initially it would be a virtual cluster, connecting with the stakeholders working in the emerging technology. It would have a physical building at a later phase. Tech Mahindra Managing Director and Chief Executive Officer CP Gurnani termed it “a cluster of buildings”, which will house start-ups and other stakeholders working on the development of the platform.

“Tech Mahindra, as a founding member of the Blockchain district, will provide platform and technology assistance to all the incubators in the district,” he said.

He announced the establishment of the centre on the sidelines of the inaugural day of an international conference on Blockchain. The two-day conference is being attended by start-ups, IT majors, academicians, policy makers and regulators.

On its part, the Telangana government would serve and cater with all the legal, regulatory and policy framework to support and promote the growth of Blockchain in the Telangana State.

The Union Government will set up a Centre of Excellence in the technology. To start with, C-DAC will soon build and design a pilot project for Property Registration System. If everything goes well, it will be phased out to other States as well.

Eleven01 Foundation will develop an India-specific protocol that will dictate and define the standards for usage of Blockchain.

“Though we can use some global standards being formulated for Blockchain, we can build our own as the technology is in initial stages of development. This can be integrated to other platforms,” an executive involved with the project told BusinessLine.

The Telangana government also signed an agreement with IIIT-H to work on protocol development, incubation, acceleration and identifying various cases for Blockchain technology.

Tech Mahindra and Nucleus Vision announced a partnership to implement Blockchain in retail and telecommunications sector.

As per the leading market veterans and industry experts says that Blockchain in 2030 could generate $3 trillion per annum in business value and power 10-20 per cent of the global economic infrastructure by then.