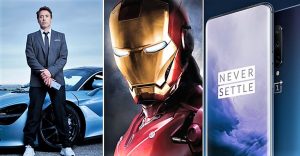 Global smartphone giant OnePlus has introduced new face to its latest marketing campaign roping in American actor and Marvel Superhero Robert Downey Jr (RDJ) aka Ironman. The campaign celebrates the revolutionary role that OnePlus has played in the smartphone industry and reiterates the brand’s ‘Never Settle’ philosophy. OnePlus just recently announced soon after the OnePlus 7 series of phones were launched.

It is believed that Avengers Endgame would be Robert Downey Jr.’s last film and which saw an 80-85 per cent occupancy of seats in Indian movie theatres, according to figures released by Box Office India. To put that into perspective, the occupancy of the film Baahubali: The Conclusion, was in the 70 per cent range. Avengers Endgame had an aggressive promotional strategy before its movie launch and within two weeks of its India release, it grossed nearly Rs. 400 crore at the box office. Baahubali: The Conclusion also crossed the Rs. 100 crore mark within three days of its release. Avengers Endgame broke that record as well by collecting nearly Rs. 157 crore during its opening weekend, as reported by the Economic Times.

Pete Lau, founder and CEO of OnePlus, said in an interview, “We at OnePlus, believe in having a laser focus in everything we do and in doing whatever it takes to create an exceptional experience for our community. Working with Robert Downey Jr, we see that these ideologies are reflected in him as well; in his creativity and dedication. This synergy has us convinced that nobody could represent what we stand for better and we are delighted to welcome Robert Downey Jr into the OnePlus family.”

Before the Avengers actor signed a deal with OnePlus, it was Bollywood Stalwart Amitabh Bachchan who was the marketing and brand ambassador. Mr Amitabh Bachchan is one of the greatest actors of Indian film industry and possesses huge fan following. Since 2017 he is working very closely with the Brand OnePlus.

The campaign featuring RDJ will be appearing in a series of brand creatives across various media channels in India and China. The last time a smartphone brand chose a foreign ambassador for an Indian market, it was Micromax when it choosed Hugh Jackman to endorse the Canvas range of phones.

We couldn’t find any biggest similarity in the two advertisment for Micromax and OnePlus are that they look like scenes out of an action packed movie. While the Micromax ads have a defined story line with a beginning, middle and end, RDJ’s ads with OnePlus imitates scenes from an action film where the hero is training himself to defeat the villain.

This is not the first time Robert Downey Jr is promoting a smartphone brand. In 2013, Bloomberg reported that HTC signed a two-year global marketing deal with the actor for nearly $12 billion.