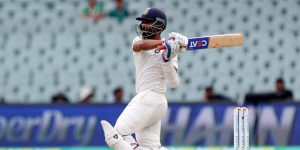 Ajinkya Rahane made a sensational start to his county career as he scored a hundred for Hampshire on debut match. The Indian Test vice-captain scored 119 against Nottinghamshire as he became only the third Indian to score a ton on county debut.

Ajinkya Rahane hit 14 fours in his 197-ball stay in the middle order as he and Hampshire skipper Sam Northeast, who also scored a ton, put up a 257-run partnership.

It is reported that ajinkya Rahane had now became the 3rd Indian Cricketer after Murali Vijay and Piyush Chawla had scored hundreds in their first match in the county cricket. While Vijay scored a hundred for Essex against Nottinghamshire in 2018, Chawla scored a ton for Sussex against Worcestershire in 2008.

While Rahane could only score 10 runs as Hampshire scored 310 in the first innings before securing a 71-run lead, the right-hander notched up his first hundred in the second innings and rescued his team and regain its position from the early loss of the top order batsman – Joe Weatherley and Oliver Soames.

Rahane, who had joined the team as a replacement for the World Cup-bound South African batsman Aiden Markram, was the first Indian to join the Hampshire county side.

He is expected to play for Hampshire in eight matches, including the current game, during the Specsavers County Championship matches, which will take place throughout May, June and July in 2019.

Rahane, who was not picked in India’s 15-man World Cup squad, has scored 3488 runs in 56 Tests for India in addition to his runs in One Day Internationals and T20Is.

On a day Team India landed in England to begin its World Cup campaign, Ajinkya Rahane scored 119 off 197 balls against Nottinghamshire.

Rahane’s smashing century came very close on the heels of a disappointing Indian Premier League, where he scored 393 runs in 14 matches for the Rajasthan Royals, with one century in its kitty.

“I am excited to be the first Indian to play for Hampshire, a county which has a glowing reputation. I hope to score runs and win as a team. I would like to thank the BCCI for allowing me to play,” Rahane had said.

Good work by Rahane. It is unfortunate that a very gifted, fighter of a cricketer like him, couldn’t make it to the National Side for the World Cup, especially at a time when India is not yet sure of its No.4.
By scoring runs for his county side, Rahane will kill two birds with the same stone. Firstly, he will show the selectors why he shouldn’t have been left out. Secondly, he will be able to cheer up the morale of the Indian team that landed on England yesterday.
Here is wishing both India and Rahane the very best of luck and Success ahead.