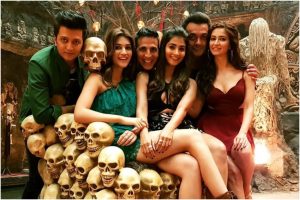 Bollywood Superstar Akshay Kumar recently surprised everybody including his fans when he unveiled First Look from his upcoming Multi Starrer comedy movie ‘ Housefull 4 ‘ after the finale of ‘ Game of Thrones ‘ aired in India.

Akshay Kumar officially teased First Look to his fans on social networking site Instagram by uploading exclusive back-the-scenes pictures of his upcoming movie Housefull 4, which is seen to be inspired by the looks of the famous HBO fantasy drama series Game of Thrones.

Akshay Kumar recently stormed the social networking platform Instagram with sharing exclusive images of funny and hilarious moments with his Housefull 4 co-stars — Riteish Deshmukh, Bobby Deol, Kriti Sanon, Kriti Kharbanda, and Pooja Hegde. The picture has been shot in taking into consideration Game Of Thrones style, with the young Bollywood actresses of the movie sitting on a throne made of grinning human skulls, indicating that the film may have a horror-comedy twist to it.

Akshay Kumar shared the picture and captioned it as, “Housefull of Thrones. Who Lives, Who Dies… Only the Script Decides” and tagged his co-stars in the fun post.

Surprisingly lately it was recently announced by the makers of the movie that Nawazuddin Siddiqui will be joining the league of Housefull 4 for a special song that will have Nawaz playing a baba living in a den with 300 disciples.

Akshay Kumar’s Housefull 4 is totally based on reincarnation. The movie is also featuring Bobby Deol and Riteish Deshmukh, who has a dual storyline – while one part of the story traces the protagonists’ lives in the current modern-day world, another part of the story takes back you 500 years ago. According to media reports, it is reported that Akshay Kumar will be viewed as a maharaja in the one piece of the story that evolves around its previous life, with Bobby Deol and Riteish Deshmukh playing his illustrious squires. Turns out, the female on-screen characters – including Kriti Sanon, Kriti Kharbanda and Pooja Hegde – will be portrayed as beautiful princesses.

A source from the creative team says “The fourth movie installment is focussed on humorous twist on rebirth. In the first portion of the movie before the interval is set in the sixteenth century, Akshay sports various looks as the lord King. Actually, the image of one of his looks, where he is parading a bare pate, became a social media sensation a year ago. Bobby, then again, will be seen brandishing long hair in this bit. Starting from the Housefull Movie franchise first part Chunkey Pandey’s character, Aakhri Pasta, has been portrayed half-Italian in the previous parts, the makers of the movie were finding it difficult to adjust him in the sixteenth century. After much-required efforts, it was finally concluded that he will be seen as Vasco Da Gama’s nephew. Given its period drama feel, this track was filmed across Rajasthan. A majority part of the movie was also shot at Film City, where a lavish palace set was built.”

Housefull 4 is considered to based on the main movie theme of reincarnation, split into two different periods means the Modern era and the Ancient era with a maximum number of scenes to be shot in the United Kingdom. The past-life sequences of the movie were shot in Rajasthan. Johnny Lever and his daughter Jaimie are also roped in to boost the humor quotient of the movie, which also stars Chunky Panday and Rana Daggubati.

Housefull 4 movie is all ready to get released Indian theatres during Diwali across India on October 26, 2019.