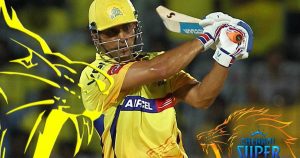 He is an Aggressive right-handed middle-order batsman and versatile wicket-keeper, he is currently claimed to be one of the greatest match-winner in limited-overs cricket. He is undoubtedly called one of the best wicket-keepers in the world of cricket in all formats. In 2012, SportsPro rated Dhoni as the sixteenth most marketable athlete in the world.

Mahendra Singh Dhoni Dhoni is the co-owner of Indian Super League team Chennaiyin FC. In June 2015, Forbes also ranked M.S. Dhoni at 23rd in the list of highest-paid athletes in the world, estimating his earnings at US$31 million.

Former Indian cricket captain truly is one of the best “finishers” in Modern Cricket format like the Indian Premier League. He has the ability to score quickly in high-pressure situations and maintaining a cool head, a feature that has also set him apart from other captains is what makes Dhoni special.

More than skills it’s his ability to keep himself poised while chasing. He has that self-belief that he himself can take his team over the line is what makes him a very successful finisher.

An as of late a detailed study report by Schbang X HaikuJAM, that utilizes unique Analytical methods and strategies like Machine Learning, Natural Language Processing, and Semiotics, has overviewed an aggregate of 84,430 haikus composed by more than 37,000 Young Indians to comprehend the perspective of India’s young millennials.

* However, Virat Kohli is the young and dynamic successful skipper of the Indian Cricket team, Mahendra Singh Dhoni has already won the hearts and minds of young Indians in the past and also currently when it comes to the Indian Premier League by over 50 percent.

* 63 percent of the haikus on the General Elections 2019 are positive, leading to 2x times where Young India chooses the politician over the party itself.

* One more interesting point found out in the recent survey is that around 9 percent of the haikus associate owning a car to freedom, over 22 percent of Young Indian teenagers associate it to a dream – a dream of providing for their respected parents.

The first detailed report of the Schbang X HaikuJAM Young India Report 2019 delves into topics that are currently a priority to the youth viz. the Indian Premier League, Election 2019, Beauty, Listening to Music, Owning a Car, Chai vs Coffee, The Next Holiday and Instagram.

What Young India has made look like only verse, with the assistance of the scientific apparatuses the stage utilizes, advertisers are onto a transformation to comprehend this dynamic age of Millennials and GenZ-ers. The bits of knowledge drawn from these haikus are uncovering the intuitive sentiments of these youthful personalities.

“This report isn’t simply getting the beat of the millennial age however has some enlightening disclosures on fluctuated themes. One such disclosure was the manner by which this age looks for get-aways to make up for lost time with their rest and not investigating another region. In the present time of an advanced overdose, this is their computerized detox. These points of view are something worth mulling over for all brands and advertisers out there, who are attempting to take advantage of these youthful personalities. It’s a fascinating time to be with regards to and we trust this information is the beginning of something new”, said Akshay Gurnani, CEO, Schbang.

This story has inputs provided by BusinessWire India. ANI will not be responsible in any way for the content of this article.