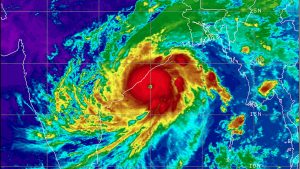 The name of the Cyclone ‘Fani’, pronounced as ‘Foni’ was suggested by Bangladesh. It means ‘Snake’ or ‘hood of snake’.

The storm is India’s strongest tropical cyclone to make landfall in 20 years.

India’s government has allocated $144 million for cyclone relief to storm-hit areas in the country’s northeast, with Indian Prime Minister Narendra Modi saying the “central government in this moment of trouble is with you all.”

It was developed In a bid to help the people during the disaster and connect the survivors with relief teams in real time, a mobile app called ‘AmritaKripa’ can be downloaded from the Play Store. It is a multilingual, supporting languages like English, Hindi, Tamil, Bangla, Kannada, and more.

Additionally for more updates and news to track Cyclone Foni, you can also follow the Twitter account of India Meteorological Department (@Indiametdept). Besides, twitter accounts of National Disaster Management Authority (@ndmaindia), Chief Minister’s Office, Odisha (@CMO_Odisha) and Naveen Patnaik, Chief Minister of Odisha (@Naveen_Odisha) can also be followed to get the latest information.

The app AmritaKripa is developed by the Center for Wireless Networks & Applications (AmritaWNA). Speaking to media, Dr Maneesha Sudheer, director of AmritaWNA, said, “Often people who need help are not able to reach the helpline numbers due to the limited number of parallel calls that these lines can handle. This negatively impacts rescue missions, and precious lives are lost.”
You can download it here on your mobile https://play.google.com/store/apps/details?id=edu.amrita.awna.floodevac&hl=en_IN

“The worldwide app directly links the help-seekers and providers in a post-disaster environment using smartphones and the Internet, where the location data is picked up automatically using real-time GPS data. In disaster situations, pinpointing locations of survivors is the key”.

The state Odisha is well known as the nation’s capital of disaster. Though Odisha, one of the most susceptible states to cyclones, is usually hit by such a storm in post-monsoon phase of October-November, pre-monsoon cyclones are also not unusual.

Just seven months ago in October 2018, cyclone Titli had battered Odisha. In an unusual twist, Titli had also changed its direction and moved towards the northeast after making landfall.

In October 2013, cyclone Phailin had hit the state and it was one of the largest storm to hit Odisha after 1999’s super cyclone.

Odisha is very familiar to cyclones and floods. The worst one, a super cyclone had hit the state in 1999, killing more than 15,000 people, with most of the casualty being reported from the state of Odisha.

Cyclone Fani will be the fourth storm to hit the country’s east coast in the last 30 years.

Hope everyone on Cyclone Fani’s path are safe and secure.

I was just doing some research about economic loss due to cyclones and how it affects the national disaster capital – Odisha. Here are a few highlights:

– Odisha is one of the poorest states in the country. And this is majorly due to the recurring losses caused by the 1.3 natural calamities it faces each year.
– In the 1970s property loss was Rs.1050 Cr. In the 80s it increased 7 fold and in the 90s it was 10 fold of the 70s figure.
– The increase in loss was due to the state’s increase in infrastructure development.
– Natural disasters put huge pressure on the state’s economy and development. Like taking 1 step forward and 2 steps back.
– One year increase in flood/cyclone occurrences cost the state Rs.9690 Cr. and severe drought occurrences shrinks the economy by Rs.6940 Cr.

In the wake of cyclone Fani which did massive destruction in Odisha, I would appeal to large corporate’s and few respected companies to take an initiative and start a crowd funding campaign and contribute the collected amount to the development and repair of the state.

Cyclone Fani is here: In 52 yrs, only 9 such cyclones have hit India in May
Timing and strength are two factors that make Cyclone Fani different from most other tropical cyclones in this time of the year. Cyclone Fani developed near the Equator and this allowed it to gather massive strength and moisture as it could travel a long distance over the sea.

Just one thing I would like to remind you Fani is powerful but you are much powerful than these cyclones.. just don’t be involve in any rumor. Be strong and kind same time to face anything. Prayers for humans-animals-trees-birds-insects.

Mark this: Observe birds, animals even insects they will tell you about the upcoming dangers if any. If you find anything abnormal in them then don’t ignore, be careful. East India and Bangladesh stay safe find a better place soon.

Malls, parks closed down across Kolkata. Airports to remain closed. Fani to enter Kolkata around midnight and intensity to stay till early morning. This is the most critical time and maximum devastation is expected. As per reports available till now huge devastation across Odisha. However, no record of casualties. In Odisha, Digha, Mandamani and other coastal towns the velocity of wind was around 140kmph to 150kmph. Expected to travel at 115kmph in Kolkata. Wind velocity expected at 115 kmph. Passengers stranded as local trains are being cancelled without prior notice.