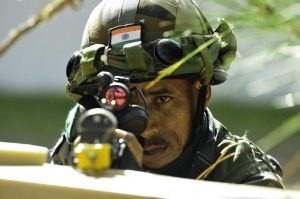 Indian scientists from couple of years are doing hardcore research and been working on all-terrain Artificial Intelligence enabled robots that might be used to patrol international border of India.

The Bengaluru-based Central Research Laboratory of defence Public Sector Unit Bharat Electronics Limited (BEL) is working on developing a prototype for such a robot by end of 2019.

The BEL has specially designed and built the robots that it will be equipped with sensors and programmed to communicate with the control centre, the report said. Additionally it will also be able to work in situations like the recent Easter blasts across Sri Lanka while conducting surveillance, it further added.

The main motive of the border patrol robots will be to save the lives of security personnel like BSF jawans deployed for border surveillance. The estimated cost of these robots will be in the range of Rs 70-80 lakh for small range of orders. This price tag could go a lot lower if the army places large orders, the report said.

As of now, 80 scientists and engineers in three Artificial Intelligence specific labs – CRLs in Bengaluru and Ghaziabad, and BEL Software Technology Centre (BSTC) in Bengaluru – are working on the AI-enabled patrol robots, the TOI report said. This number is expected to be increased to more than 100.

While the team of experts has already built a rudimentary robot, work is going on to develop the next generation of robots with AI capabilities, the report said. The list of problems includes need for massive raw data that is needed for such products, which once gathered, could be used to customize algorithms to instruct the robot to perform very specific tasks, BEL, Chairman and Managing Director Gowthama MV told the daily.

The report said that the BEL is planning to conduct internal review of the first prototype by December first week. The user trials for the same might happen by February 2020. The BEL will also be ready with a few other AI-enabled products by the end of this year, however no specific requirements have been made by the armed forces, the report said.

“As a company committed to Research and Development, we want to be able to show capabilities that can become useful for armed forces, this is one such project,” the report quoted Gowthama as saying.

“Like Apple founder Steve Jobs said, users don’t know what they want until you show it to them. As a company committed to R&D, we want to be able to show capabilities that can become useful for armed forces, this is one such project,” Gowthama said.

As part of enhancing India’s defence capabilities, scientists have been quietly working on all-terrain artificial intelligence (AI)-enabled robots that may eventually patrol the country’s borders.

Its really a good news for India’s National security and fight against terrorism. DRDO and BEL needs to start working of Exoskeletons and Direct Energy Weapons to ensure that Indian soldiers cab remain adequately equipped in the 21st century.
It’s really important that Government of India initiates a merger of Bharat electronics limited with Bharat Sanchar Nigam Ltd to develop a PSU with expertise in both Electronics and IT sector.
BEL should start Semiconductor Manufacturing as well as Development of Civilian electronics like Cell Phones, Laptops etc to expand its areas of revenue generation.