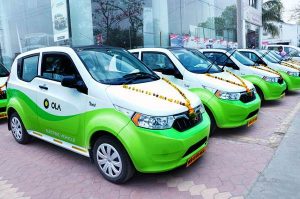 India’s leading Cab hailing services Ola said it would provide free rides to people with disabilities (PWD) to the polling booths in association with the Election Commission officials as a social responsibility to increase voter participation in the Lok Sabha Elections in Karnataka The company said it has partnered with the office of the Karnataka Chief Electoral Officer and others, including the civic bodies in various cities in this regard.

As a part of the social service activities, Ola Cabs has assigned 270 cabs to the election commission which will be made available to trasnport PWD voters to polling booths, a release said Wednesday. Karnataka is having two phase Lok Sabha polls with 14 of the 28 seats going for polling.

The second phase will be on April 23, 2019. This free ride facility would be made available across Bengaluru, Mysuru, and Mangaluru on April 18 and Ballari, Hubali-Dharwad, Gulbarga and Belgaum on April 23, the release said.

We are grateful to Ola Cabs and appreciate their efforts in enabling seamless transportation so that every citizen can go out and vote, Surya Sen A V., Joint Chief Electoral Officer of Karnataka said.

Ola Cabs Regional Head (South) Vishnu Bommareddy said availability of convenient transport options had resulted in positive voter turnout in recent past and the company would continue to back initiatives that support the constitutional machinery of the country.

“We are glad to partner with the local authorities and facilitate hassle-free mobility for every voter in Bengaluru, he added. Ola has set up helpline numbers 9071464553 / 7624915133 to assist the PWD voters and address any issues that arise, the release added.