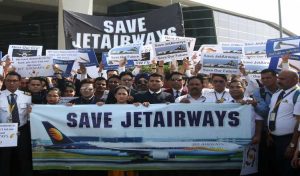 An Apex body representing pilots of Jet Airways on Monday has urged Indian Prime Minister Narendra Modi to help with a rescue plan by saving jobs at the financially unstable airline and on other hand also requested State Bank of India to boost with financial liquidity to the cash strapped carrier with Rs 1,500 crore as part of a rescue plan that was agreed upon the previous month, PTI reported.

Jet Airways is a Debt Trap & Naresh Goyal is the kingpin of that trap. Because #banks are already so deep into it, it’s in their interest to keep the airline running. It’s their best chance to recover investments. They keep pumping money with the hope that someday fuel prices will drop and Jet will make money!

“We would like to urge State Bank of India to release an ample amount of funds of Rs 1,500 crore for the Indian airline to help it continue further tasks and operations,” National Aviator’s Guild Vice-President Adim Valiani told reporters in Mumbai. “We also like to  request the Indian Prime Minister Narendra Modi to help to save 20,000 odd jobs at the airline.” However, the government had already expressed its concerns to intervene, “but, still we have not seen the money yet”, ANI quoted Valiani as saying.

The heavily indebted Airlines is working just six to seven planes as of now. Its each and every Aircrafts has been suspended after it defaulted on installments to banks, pilots and providers. As indicated by a leading newspaper, Jet Airways has suspended tasks to South and Southeast Asia and stretched out the suspension of administrations to Toronto and Paris from Chennai and back.

Here are Jet Airwaysrevenue numbers I pulled from Wikipedia. 2 profitable years since 2010. Dig deeper & you’ll find that before 2016 it made a profit way back in Financial year2006-07 (27.9 Cr). The profit in 2016 & 2017 was primarily attributed to lower fuel prices. Jet also sold 24% equity to Etihad airways around the same time, which they are now happy to sell at a 75% discount!

Earlier in the day, the airline’s pilots, engineers and cabin crew members held a demonstration at the airline’s Head Office in Mumbai. “Managers, Pilots, Crew Members and Engineers have not received salaries or any sort of dues are cleared for the last three months, and wages and salaries have also been unstable for the last 7–8 months,” said Valiani.

In March 2019, Jet Airways founder Naresh Goyal and his wife Anita Goyal had put up their resignation papers from the board of directors of the company, which had said that an interim panel would be set up to handle its current ongoing crisis and affairs.

It is about time the grief and agony for the employees are over, now they can move on with their lives.

I’m perplexed at the effort that is going into saving Jet Airways. Some companies are run to accumulate losses & then be sold to a larger profitable enterprise. Sometimes it works, this time it failed.

PNB & SBI – heard those names before? They are involved with Jet too. Who is taking decisions as these banks? Who is accountable?

Does Jet have enough assets to repay this debt? Is Naresh Goyal accountable? Does it make sense to continue running the #airline?