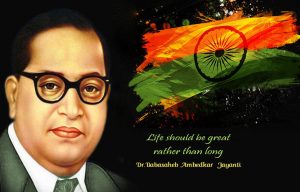 President Ram Nath Kovind today led the country in paying homage to the architect of the Indian Constitution Dr BR Ambedkar on his 128th birth anniversary. Mr Kovind made prayers with flowers as a tribute at the statue of Dr Ambedkar at the Parliament House Lawns in New Delhi today morning. Vice President M Venkaiah Naidu, Prime Minister Narendra Modi, Lok Sabha Speaker Sumitra Mahajan, Social Justice and Empowerment Minister Thawarchand Gehlot, Ministers of State for Social Justice and Empowerment Ramdas Athawale and Vijay Sampla and Minister of State for Parliamentary Affairs Vijay Goel were among the dignitaries who also present at the tribute ceremony to Dr Ambedkar.

The Vice President said, Dr Ambedkar relentlessly campaigned against social discrimination and inequalities and was a firm believer in the empowerment of women through education. He said, Dr Ambedkar’s contribution to nation building is invaluable and his ideas will continue to inspire every Indian for all times.

Dr BR Ambedkar was Born on 14 April 1891 in the town and military cantonment of Mhow (in Maharashtra pre-independence, now in Madhya Pradesh), which is now known as Dr. Ambedkar Nagar now, Dr. Bhim Rao Ambedkar was the 14th and the last child of his parents. His original surname was Ambawadekar, however, it was changed to Ambedkar in school by his teacher.

Dr. B R Ambedkar has the highest number of statues in the world. In 1950, his first statue was built in Kolhapur city. The credit of giving a place to “Ashok Chakra” on the Indian tricolour goes to Dr. B R Ambedkar.

Dr. B R Ambedkar when converted to Buddhism religion, called him “the modern Buddha of this age”. Ambedkar took his last breath on December 6, 1956, in New Delhi.