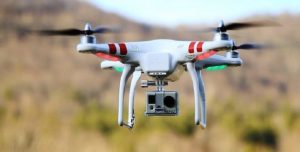 The use of drones will play an important role to help escort polling parties to-and-from the polling stations where 741 polling booths have been marked ‘hyper sensitive’ or Critical. In the past, the routes were monitored using Choppers or helicopters.

The Election Commission has made a breakthrough by deploying drones for surveillance in polling stations in Uttar Pradesh’s Ghaziabad and other states of India. The first of seven phases of India’s general elections kicked off today. Voters in 18 Indian states and two Union Territories began casting ballots on the first day of the election, which will be staggered over six weeks. A total of 142 million people will vote in 170,664 poll booths to decide the fates of 1,279 candidates. Voting concludes on 19 May and counting is scheduled for 23 May.

Drones are introduced first time to keep a watch over the polling booths during the Indian general election. The Election Commission of India is deploying drone technology in areas it considers to be ‘critical’ or ‘sensitive’. So far there are reports of the drones being used in Gautam Buddh Nagar in Greater Noida and the Bastar constituency in Chhattisgarh. There a million polling booths managed by 11 million officers, where as many as 900 million citizens could come to vote.

With voting for 91 Lok Sabha constituencies spread over 20 states and Union Territories as the first phase of the mega seven-phase electoral exercise kicked off, the election commission this year will use drones in Gautam Buddh Nagar LS constituency.

According to daily newspaper DNA, 13 drones are going to be operating across the district, especially in sensitive areas in order to keep an eye on unwanted activities on the ground. BN Singh, District Magistrate, Gautam Budh Nagar told the leading daily that, “There are a total of 23,995 polling booths in the districts of which 163 are critical/sensitive booths keeping in mind the past activities in the area. The police officers, along with the administration, are on toes to ensure law and order in the district.”

Even in Naxal-affected areas like Bastar Lok Sabha constituency in Chhattisgarh officials will be using drones. An official said patrolling on the ground as well as by drones, which will keep a hawk eye from the sky, has been undertaken to track the movement of Naxals, especially in areas close to polling booths and camps of security forces.

Considering the vast disparity becomes the number of people who will be voting and the number of officials to keep tabs on them, the ECI is using drones and unmanned aerial vehicles (UAVs) — especially in areas it deemed ‘critical’.