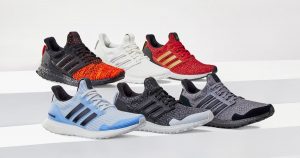 Adidas has smartly redesigned the iconic houses and characters of Westeros in sneaker form. The collaboration features a collection of six limited edition Ultraboost, each designed to represent the characteristics, colors and details of the heroes and villains to which they refer in Game of Thrones.

A much-awaited limited edition line of running shoes inspired by popular blockbuster television series “Game of Thrones” ahead of its final eighth season , has been launched.

Details include their faction’s sigil on the tongue and motto on the heel tag. House motifs inspired by the show come together to create bold and distinct colourways.

In India, the limited edition ‘adidas x Game of Thrones Ultraboost’ collection will be available from March 22, 2019 at selected Adidas outlets.

Since first hitting the screens in 2011, HBO’s “Game of Thrones” has made waves across the entertainment landscape, transcending the world of Westeros to anchor itself in modern pop culture.

Alberto Uncini Manganelli, General Manager adidas Running, said in a recent interview “Collaborations with franchises like ‘Game of Thrones’ are part of our DNA. When brands and television series alike are able to move beyond their primary platform and spill into popular culture, we see inspiration.”

The Game Of Thrones x Adidas pack is a collaboration that features a collection of six limited edition Ultraboosts, each designed to represent the characteristics, colors and details of the heroes and villains to which they refer with special insignia.

1). The Night’s Watch :- A leather lace cage puts the shoe together which represents the leather Armour of the Night Watch.
2). The House Of Lannister :- The Lannister sigil prides itself with a lion and a “Hear Me Roar” tag line and a confluence of gold and crimson. These indicators are clearly visible in this shoe.
3). The House Of Targaryen: Daenerys :- With white, cream and silver accents on the laces, lace cage, heel cup, and heel tag this shoe is probably the most elegant of the lot. Targaryen is considered the noblest House of the lot, their family has distinct features of pale skin and silver hair which are accounted for in this Ultra Boost.
4). The House Of Targaryen: Dragons :- The House of Targaryans: the former ruling House of Westeros’ sigil is appropriated for this shoe. Their slogan, “Fire And Blood” is used both here and for Dany’s Ultra Boosts.
5). The House Of Stark :- Black and grey that represent the house have been visibly used on the prime knit surface and touches of black on the lining, mudguard, Boost mid sole, rubber out sole, heel cup, and their signature three stripes.
6). The White Walkers :- For its Ultra Boost, ice blue is used on the prime knit surface, white Boost mid-sole and white rubber out-sole continue the theme with hints of black and the tagline, “Winter Is Here” to send a chill down your spine.

According to Jeff Peters, Vice President of Licensing and Retail, HBO, the line will resonate with athletes, sneaker heads, fashionistas and “Game of Thrones” fans alike.