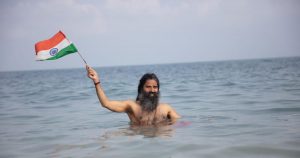 Yoga guru Baba Ramdev is likely to head the country’s first government-recognised board of Vedic education with a proposal from his Patanjali trust being recommended by a selection committee.

Yoga guru Ramdev is all set to spearhead India’s first government-recognised board for Vedic education. A selection committee on Saturday adjudged his Trust’s bid for setting up the proposed Bharatiya Shiksha Board (BSB) as the best. During last week, a five-member panel’s recommendation will be considered by the governing council of the Maharshi Sandipani Rashtriya Vedavidya Pratishthan (MSRVP), headed by HRD Minister Prakash Javadekar. The MSRVP, a fully-funded autonomous body under the HRD Ministry working on promotion of “Ved Vidya”, has been entrusted with the responsibility of appointing a private sponsoring body for putting the BSB in place.

Other players in the race: The Ritnand Balved Education Foundation, which runs the Amity group of institutions, and Pune-based Maharashtra Institute of Technology were the other front runners.

The three contenders had earlier made a detailed report presentation to the five-member selection committee. According to media reports, Acharya Balkrishna, who represented Patanjali Yogpeeth offered to invest Rs 21 crore for the development of the Board. He said that the Patanjali wanted to house BSB’s headquarters in Haridwar and that the Trust had the required infrastructure for the Board. Balkrishna also advised the panel that the Trust would want Ramdev appointed as the chairperson.

Interestingly, some years ago, the Human Resource Development Ministry under Smriti Irani had rejected Ramdev’s proposal for establishing a Vedic education board. Irani had expressed reservations about the government recognizing a private school board.

The Board will articulate syllabus, conduct exams, issue certificates and recognize Gurukulas, pathshalas and schools that offer a blend of Vedic and modern education. The Board will charge an affiliation fee and examination fee from schools, just like CBSE board is doing.

Schools that are likely to benefit are Ramdev’s residential school Acharyakulam in Haridwar, Vidya Bharati schools run by the RSS, Gurukuls run by the Arya Samaj.

Earlier, the government gave in-principle approval to a Vedic university to be established at the central level, which will be run by Patanjali. According to a media reports, Ramdev Baba had shown his interest to become the chairperson of the university and also advised government to bear all the expenses.