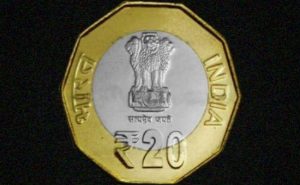 The Government had recently unveiled first time ever Rs 20 coin which will be shaped like a 12-edged polygon with design of grains to denote farm dominance in the country.

Besides, new series of one, two, five and ten rupees coins too would be minted, which will be circular in design and have denominations written in Hindi language.

The exact date of issuance of these new series of 20 rupees coins is yet to be confirmed.

The Rs 20 coin will weigh 8.54 gm and its outside diameter will be 27mm with the outer ring made of nickel silver and the center piece of Nickel brass, a finance ministry notification said.

The reverse side of the coin would have the denominational value ’20’ in the international numerals along with the iconic Rupee symbol.

“The design of grains depicting the agricultural dominance of the country is flanked on the left periphery of the coin,” the notification said.

The year of minting in international numerals shall be shown on center of left periphery of the coin, it added.

The new series one rupee and two rupees coin will weigh 3.09 gm and 4.07 gm, while the diameter would be 20 mm and 23 mm respectively.

Coins are minted at the four India Government Mints at Mumbai, Alipore (Kolkata), Saifabad (Hyderabad), Cherlapally (Hyderabad) and Noida (UP).

The coins are issued for circulation only through the Reserve Bank in reference to terms of the RBI Act.