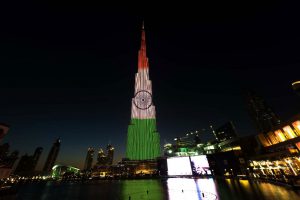 A structure taller than Dubai’s iconic 163-floor Burj Khalifa with a green boulevard bigger than Mumbai’s Marine Drive will form part of a new eastern waterfront to be developed on a wasteland in the country’s financial capital.
These grand plans are part of a dream project of Nitin Gadkari, the union minister for shipping, road transport and highways, who sees the Mumbai Port Trust as the “richest landlord” of the city and wants to give a makeover to its huge swathes of industrial wasteland.

Mumbai to get building taller than boots of Burj Khalifa and Road bigger than marine drive the government is reportedly planning to develop as soon as possible. Nitin gadkari plans to set a foundation for a historic landmark in  Mumbai gotta he has affirmed that the plan is almost ready and will be implemented once approved by the Cabinet. The proposed project also include creation of space for community recreation and engagement for mumbaikars. We will also have a statue of the Maratha warrior Shivaji the foundation stone for which was inaugurated by the Prime Minister Narendra Modi last year in December. Maritime Museum and marinas are also part of the grand makeover plan.

“About 500 hectares is proposed to be developed with a mix of port operations, business, office, commercial, retail, entertainment, community projects and convention centres, etc,” a top official said.

MbPT, which was earlier called the Bombay Port Trust, is one of the largest public land holders in Mumbai city and has been operating the port since 1873. It is one of the top 12 major ports in the country.

Mumbai Port has already invited global tender from consulting firms for master plan and infrastructure design of the port.