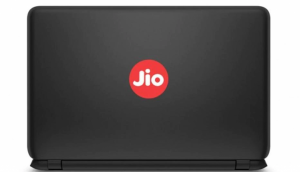 Reliance Jio entered the market one year back with a  aim to create Digital Revolution across the country and left  everyone crazy with their attractive mobile data plans. After that Reliance Jio Infocomm was in news that they are soon foraying into Digital satellite service provided through high end Android Based Set Top Boxes. Now Reliance Jio again shocked the market with its new upcoming venture which is Reliance Jio Branded Laptops. It would be launched in couple of months on lines and style like Mac Book Pro with 4G Support. It will come up with inbuilt Sim Card slot and will be manufactured by Foxconn.

Reliance Jio Laptops would be based on Windows Operating system with a 13.3-inch display with a 1920 x 1080 pixel resolution with an aspect ratio of 16:9. Reliance Jio might also launch laptops based on Chrome Operating System instead of Windows Operating System. Reliance Jio laptop will try to promote Jio suite of services. Jio-branded applications are currently available only for Android and iOS and ChromeOS’ native support for Android apps will help Jio to push its apps on the large screen device.

Reliance Jio laptop with 4G VoLTE SIM, 13.3-inch screen may launch soon which will provide the web connectivity through a 4G network to the laptop user. This means that the users won’t have to use any dongle or USB to get the internet connection on Jio laptop. The laptop will also reportedly allow VoLTE calls. Reliance Jio Laptop would be launched with High end High Definition camera placed above the screen for making video calls and conferencing and that the laptop will powered by a current-generation Intel Pentium quad-core processor. Reliance Jio Laptops will have 4GB RAM, 64GB eMMC or 128GB SDD storage on board. On the designing front, the laptop will have Magnesium Alloy Body or Metal Body with 12.2mm thickness and 1.2kg weight. The reports states that there will have Chicklet style slim keyboard without any number pad on it. Reliance Jio laptop will be well equipped with great connectivity like Bluetooth 4.0, two USB 3.0 ports, micro HDMI port and microSD card slot.

Reliance Jio laptop will be a high-end machine or gadget and possibly the Price range will be starting from Rs 35,000 which will compete with Xiaomi Notebook or MacBook Air. Reliance Jio earlier had launched a line of 4G smartphones under brand name Lyf that saw a robust sale because of the Jio SIM that come bundled with it. There are also rumours that company is working on DTH services and may launch it soon. It is also working on Jio Fibre, a wired internet service, as well as already sells 4G dongles.