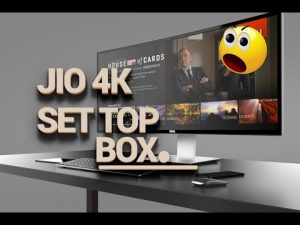 Reliance Jio Infocomm had already started procurement of importing Internet Protocol (IP) in bulk quantities for a massive commercial launch across the country. Instead of the regular IR remote controller, they come with Bluetooth remote controllers and can be also controlled with smartphones using the app. The remote controller also has a mic for voice search. As far as the connectivity options are considered, there will be LAN, USB, and HDMI ports along with built-in Wi-Fi support. It runs on years old Android 4.4 Kitkat and only supports a maximum of Full HD resolution.

The import of these IP based TV service will be through Fibre to the home (FTTH) connectivity which will offering host of services to its prospective consumers. Reliance Jio had already imported around 17,000 set top boxes from Vietnam which will be costing around Rs. 5,500. Earlier this month, Xiaomi has debuted the U.S market by launching the Mi Box powered by Android. It costs just USD69 and supports 4K and HDR. In India, we have the Amkette’s latest EvoTV 2 that costs Rs. 6,999.

Reliance Jio Set Top Boxes Would Support 4K UHD Service With the aim transform the viewing experience. However, to get such picture quality, prospective customers would require a 4K supported TV for the best Television experience.

Reliance Jio Set Top Boxes to be Controlled by Android and is compatible to run on the Android Marshmallow version and it can transform any normal LCD/LED TV into a Smart TV which is connected to the internet.

Reliance Jio Set Top Boxes Will Have Google Play Support with the Google Play store pre-installed, Reliance will offer the Jio suite of applications including the Jio TV and Jio On Demand.