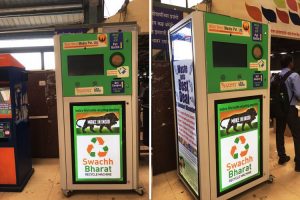 Wow its really amazing to see how Mumbai Railway Station are going green by encouraging people to use Plastic recycling machines to recycle their used plastic bottles. These machines is now installed at various Mumbai railway stations and customers gets rewards in return to recycle their plastic waste. Actually we had seen that this plastic waste like bottles are thrown here and there at railway stations. A really unique initiative started by Western Railway and the Wockhardt Foundation has set up ‘Swachh Bharat Recycling Machines’ across stations in Mumbai allows people to dispose their used plastic bottles for reward points and discounts. This machines recycle plastic waste to produce polyester yarn which can used in clothing, bags etc. This idea had been a huge hit across the city’s commuters. 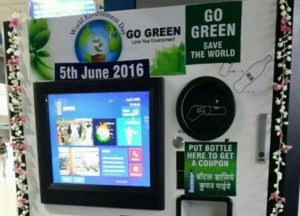 Its really simple process for example even illiterate people can also used this plastic recycling machines by inserting the Polyethylene terephthalate (PET ) bottle where it is checked and than crushed by the machine after that the machine gives the user the option to give this recycled bottle as donation or get Paytm points for recharges or users can opt for discount coupons from Sahakari Bhandar and Reliance Fresh stores. This project was initiated on June 5, 2016, which was also the World Environment Day, with one of these machines being installed in South Mumbai’s Churchgate station. After successful response from commuters similar machines have been installed at Dadar, Mumbai Central, Goregaon, Andheri, Santacruz and Bandra stations. Mukul Jain, Divisional Railway Manager of Mumbai Central Division of Western Railway says that as huge response from public they are looking to expand it to 20 railway stations in next two months. Wockhardt Foundation are really putting great effort on making this intiative more successful by implementing more attractive discount offers from other retail stores, restaurants and grocery stores. As per the reports they are in talks with leading Pizza chain to sponsor their intiative in exchange by providing the commuters huge discount and offers. These reward schemes, according to the Wockhardt Foundation, “motivate repeated use” of the machine by individuals.
Wockhardt Foundation and Western Railway says that it is a Sustainable Business Model which is really incredible that it has already made the project self sufficient and it does not cost anything to the railways. Infact they are running this machines at no cost and additionally they are generating revenues from selling advertising space to the sponsors which is a win-win for the government, the environment and everyone else involved.