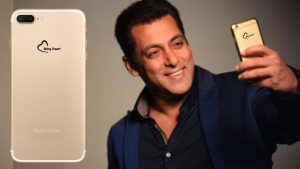 Salman Khan Super Star of Bollywood who had launched its Clothing Brand named “Being Human” couple years ago is now become smarter day by day by launching its Brand New Smartphone as “Being Smart”. Sallu Bhai who had made huge success with Being Human Business Venture is now targeting affordable Smartphone market in the range of Rs 20,000. Salman Khan Being Smart Android based phone will challenge its Chinese Smartphone maker Oppo, Vivo and Xiaomi in the mid budget segment. Salman Khan believes that today country needs more connectivity and affordable gadgets so that Indian Common man can fulfill their Dreams. In past Salman Khan had launched its first business venture “Being Human” which was Non Profit Organisation and for that he tied up with Mandhana Retail from which his Charitable Trust receives 5 per cent royalty. Being Human charitable foundation utilizes its royalty to support education and healthcare initiatives across the country. 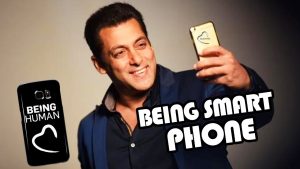 According to the reports Superstar had already tried 2 yeras back to enter the smartphone market but negotiations failed as Salman Khan was demanding higher royalty from smartphone makers. Being Smart will be coming with Android based operating system because it has majority market share of 84 percent in Q4. The Dabangg star has already finalized the deal with the Chines Smartphone maker to start manufacturing as soon as possible. On the other hand he is also building Operational Management team of High Skilled Professionals and great leadership qualities. As per the reports Salman Khan or either Family members will take direct shareholding in the new business venture. Being Smart is likely to be launched online before hitting its retail outlets. Being Smart will also be available at Being Human outlets which already sells Clothing and Accessories. Salman Khan is very excited and gearing up to launch the latest series of smartphones by the end of this year before the festive season start. Market experts says that considering the Stardom which Salman Khan enjoys in the country will create huge demand among its loyal Fans.