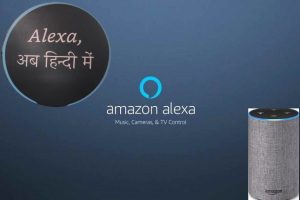 Amazon has added our country’s most spoken language Hindi to Alexa, a welcome step, and it is expected that other Indian languages will be added soon. This is the success of India’s linguistic prosperity.

“Starting today, the Amazon Echo users in India will be able to set up Hindi as their default language. Amazon says Alexa can now understand the customers speaking completely in Hindi or Hinglish, in various contexts as well as varied dialects and accents.”

Hindi is Amazon Alexa’s newest language! “Alexa, kya Aaj Barish hogi ?” Those who have interacted with Amazon’s virtual assistant before would know that Alexa can’t comprehend Hindi. India is a major growth market for the Amazon team and testifies to the potential of Alexa’s global team working to introduce more regional language capabilities to the voice-based assistant who has stormed India’s living zones.

Amazon launched Alexa in Hindi Avatar today, empowering hundreds of thousands of Indians back home to interact with Alexa in Hindi and Hinglish. This couldn’t have been possible without the hard work of so many different teams spread across continents. But, this is just the beginning and we’ll strive to make this experience seamless for our customers.

Google Assistant extended its products previously this year and presently knows most of the languages of any voice assistant: 30 languages in 80 nations. Siri from Apple is next in line with 21 languages in 36 nations. While Alexa can be accessed across various devices in 41 nations with 6 languages.

Now, we can know how Artificial Intelligence and Machine Learning are playing an important role to scale up any industry, it becomes equally essential to have a team behind adopting these new innovations!

Today, I’m so excited to share the news that Alexa is now available in the Hindi language! This effort has been the product of hard work by brilliant Amazonians eager to bring conversational AI to more people. It is also a proud moment for the tens of thousands of Alexa customers who are passionate about language and have been part of teaching Alexa this language through our skill.

Alexa now speaks India’s most popular language, as Amazon seeks new ways to reach more than half a billion potential users in the country.