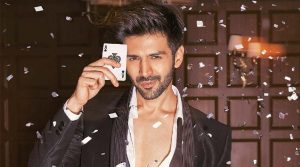 Bollywood Sensation, Kartik Aaryan, is now totallly transforming out to be blue eyed Hunk in the world of endorsement too. With the huge success by providing back-to-back super box office hits of Sonu Ke Titu Ki Sweety and Luka Chuppi (and Pyaar Ka Punchnama 2), he has now evolved as one of the new happening young Bollywood stars in the Glamour World. No surprises, with a flurry of films as well as endorsements already in motion, the 28-year-old has found an enviable standing in the industry.

“There is a good ROI (Return on investment) that he is guaranteeing, and with no starry airs around him, he is managing to form a connect with filmmakers, as well as the aam junta. As the boy next door who comes from a humble background and realizes that it takes a lot to reach where he has from where he was, Kartik is keeping his price balanced, yet competitive,”.

With the recent association with Leading Chinese Mobile Smartphone Company Oppo as the latest brand in his portfolio and Irus by Idee, Mufti, Hummel, Boat, Emami and Magic Moments as some of the other biggest endorsements that he is already boosting himself to new avenues, Kartik Aryan is pushing himself towards the visibility factor both for the brand and for his personality. That’s is the real success mantra which helps him to be diffrent from the rest and explore him for being a good mix of talent, and the success that he has built, managed and sustained especially during previous few years has resulted in raking good moolah.

“He is one of the youngest to have ensured over Rs 200 crore having been generated in revenues from the theatrical run of Sonu Ke Titu Ki Sweety and Luka Chuppi, and we are talking about just the domestic run. As for the endorsements, the logic is simple. When you do good work and enjoy so much popularity, brands definitely want to cash in on that. A new face with appeal among st the masses as well as classes always helps,” an industry experts said.

As for the Indian Film Industry, there are at least two more blockbuster movies to be hitting the screens in period of 12-18 months. Mudassar Aziz’s Pati Patni aur Woh arrives this year. Imtiaz Ali’s sequel to Love Aaj Kal is expected to be releasing on Valentine’s Day next year. And it is expected that Karthik Aryan will also deliver massive success and easily cross the Rs 100 crore mark.

“The expectation is definitely there, considering the kind of fan following that Kartik has started generating now. There are more brands that have already lined up for Kartik to endorse. Before May ends, there are at least a couple of product announcements that are expected to be made,” a trade insider said.

With the sudden spike in his popularity in last few years both in films as well as brand endorsements, Kartik Aryan is only expected to grow further in the right direction in coming years. And it is also very much shocking and surprising that when a non-industry-backed kid manages to do that!