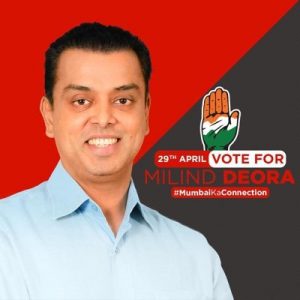 “I believe that Milind has in-depth knowledge of the social, economic and cultural ecosystem of the South Bombay constituency,” Mukesh Ambani says in a video tweeted by Milind Deora.

Deora has posted a 2 minute 17-second video on his Twitter account where shopkeepers, residents and industrialists are openly endorsing him.
“Milind is the man for South Mumbai,” says Mukesh Ambani in the video.

From small shopkeepers to large industrialists – for everyone, South Mumbai means business.

We need to bring businesses back to Mumbai and make job creation for our youth a top priority.#MumbaiKaConnection pic.twitter.com/d4xJnvhyKr

“Having represented South Mumbai for 10 years, I believe Milind has in-depth knowledge of social, economic and cultural eco-system of South Mumbai constituency,” he adds.

The Kiranas, shopkeepers and entrepreneurs who appear in a video said that the Congress candidate has supported them on several occasions. “He stands for us whenever we have a problem.”

Milind Deora is trying to win back the South Mumbai seat from incumbent Shiv Sena MP Arvind Sawant. In 2009, Milind Deora had won the seat with 2.72 lakh votes. In 2014, he lost back the seat to Sawant.
On Wednesday, attacking Shiv Sena – BJP regime, Deora asked residents of Mumbai not to pay property tax till the time the saffron alliance fulfilled its promise. Deora has also expressed confidence that his party along with partner NCP will win all the six Lok Sabha seats in the metropolis. In the previous election, the party had drawn a blank in Mumbai, with BJP-Shiv Sena registering a landslide victory in 2014.

Deora is taking on Shiv Sena MP Arvind Sawant in Mumbai South, which votes in the ongoing general election on April 29, 2019. Maharashtra represents the second highest amount of MPs to the Lok Sabha that is 48 seats. With 80 seats, only Uttar Pradesh elects more lawmakers to Parliament’s lower house.

It is very rare of India’s richest man to canvass for any candidate.

“I knew that (Mukesh Ambani’s) endorsement or Uday Kotak’s endorsement would get more attention than others but I’m very proud, I’m equally proud that I’m being endorsed by paanwalas, by small traders, by an important industry in this area by the way called MAASMA… That’s something you will have to ask him why he felt I’m the right person for South Mumbai ,” said Milind Deora, who has also participated in campaigns related to Mukesh Ambani’s telecom network Jio.